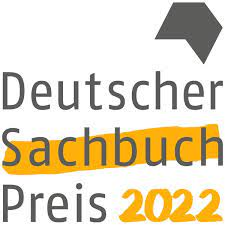 The German Non-Fiction Prize will be presented this year for the second time by the Foundation for Book Culture and the Promotion of Reading to outstanding non-fiction written in German. The winner will be announced on May 30 and will receive a prize of € 25.000, the seven finalists will each receive € 2.500.

We're happy to see five B&G titles among the finalists:

Alice Bota, Die Frauen von Belarus (The Women of Belarus, Berlin Verlag)
Peaceful demonstrators in Belarus defied the violent regime. Alice Bota tells the stories of the three leading protagonists, who became politicians against their will: Svetlana Tikhanovskaya, Maria Kolesnikova and Veronika Zepkalo. A portrait of an uprising.
"A convincing plea for free, liberal, pluralistic societies and against post-Soviet-style dictatorships – from the mouths of women who are fighting for their freedom right now in the middle of Europe.Bota’s feminist perspective unites contemporary and social history."

Stefan Creuzberger, Das deutsch-russische Jahrhundert (The German-Russian Epoch, Rowohlt Verlag)
German-Russian relations – in all their ambivalence, contradictoriness and violence – played a key role in the 20th century. Stefan Creuzberger tells the story of this tense relationship in an era marked by dramatic turning points, interconnections and change. "Is it possible to understand war? To understand Vladimir Putin, or contemporary Russia? – Probably not. But what we can understand, in retrospect, is how events develop and what they lead to. Creuzberger’s brilliant presentation of details is impressive, revealing a wealth of interconnections in our shared history that helps us to better understand our relationship with Russia today. At the same time, his interpretation of the present is also a revelation."

Samira El Ouassil & Friedemann Karig, Erzählende Affen (Narrating Monkeys, Ullstein Verlag)
A powerful story can save the world – or destroy it. It can decide elections, save lives, but also start wars and entrench injustice. Based on influential narratives from antiquity to the present, Samira El Ouassil and Friedemann Karig trace this ambivalent power – and show which stories are dangerous to us today and why we need new ones. "Humans are animals capable of telling stories. They transform the jumble of their experiences into coherent stories with a beginning, an aim and an end. This ability not only saved the life of the storyteller Scheherazade, but also gave Homo sapiens a distinct evolutionary advantage. Criss-crossing through the ages, El Ouassil and Karig trace this phenomenon and, vividly and with edifying enthusiasm, describe how it continues to function today."

Ludwig Huber, Das rationale Tier (The Rational Animal, Suhrkamp Verlag)
Can we grant non-human beings rationality and consciousness? Ludwig Huber takes stock of the current state of research on animal thinking and, drawing on the most significant experiments and observations, explains what animals can do. These new scientific findings compel us to reconsider our current attitude towards animals. "A rook learning to extract food from a tube with a stick; monkeys cracking nuts with a wide range of tools; dolphins hesitating when they don’t recognise a sound correctly. Animals communicate, read minds and plan actions. His book is science and elucidation at its best."

Natan Sznaider, Fluchtpunkte der Erinnerung (Vanishing Points of Memory, Carl Hanser Verlag)
What distinguishes racism from anti-Semitism? Is it possible to commemorate the victims of the Holocaust and of colonialism without relativising history? In the work of Hannah Arendt, Edward Said and others, Natan Sznaider finds ideas and arguments to advance the debate on the relationship between colonial crimes and the Holocaust. "Natan Sznaider intervenes in the heated controversy about the relationship between the Holocaust and colonialism. Drawing on authors such as Hannah Arendt and Albert Memmi, he offers important suggestions to facilitate a productive conversation between postcolonialism and Jewish experiences. An important, stimulating and intelligent book in a debate that is, as Natan Sznaider notes, about nothing less than our “shared responsibility for the public sphere”.